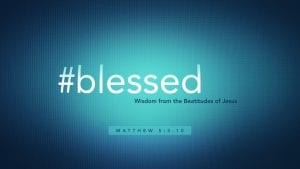 This summer (July & August) we will be looking at the Beatitudes at the beginning of what we call the Sermon on the Mount. These statements are key to understanding the Upside Down Kingdom 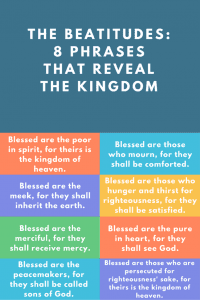 Rembrandt`s Return Of The Prodigal Son, was painted in 1668, near the end of his life. It is a truly astounding work of art. The original is a large painting 8’ by 6’, on display at the Hermitage in St. Petersburg, Russia, but even the print in our lobby conveys that which is almost inexpressible.

The painting is, as the title says, about the Return Of The Prodigal Son. And like the parable’s younger son, I often want “my due” and I want it now, so I can control and manage it, and while I will likely not lose it all on “loose women” and end up feeding pigs – that desire for control can drive me far into a distant country where I don’t hear God and I certainly don’t allow Him to guide me.

Henri Nouwen in his reflection on this painting writes

“… As long as we live within the world’s delusions, our addictions condemn us to futile quests in “the distant country”, leaving us to face and endless series of disillusionments while our sense of self remains unfulfilled…
It’s almost as if I want to prove to myself and my world that I do not need God’s love, but I can make a life of my own, but I want to be fully independent.” (p43)

“The farther I run away from the place where God dwells, the less I am able to hear the voice that calls me the beloved, the less I hear that voice, the more entangled I become in the manipulations of power games of the world… The world around me becomes dark. My heart grows heavy. My body is filled with sorrows. My life loses meaning. I have become a lost soul.” (p47)

This loss of everything brings me to what is left – my identity. Maybe not rock bottom – but my very bedrock. It is then that I might (or I can finally) hear His voice, ever so faintly. And so I recognize myself as the younger son, needing to return to God, to be reborn (again and again) in Him, to receive the mercy He is waiting to give me. But I cannot enter into God’s joy or easily accept His mercy when it is presented to me if complaint engulfs me.

And I also see that I am the elder brother too. I am not poor, hungry, or persecuted. I am not marginalized. I am public with my faith – so have I already received my reward? Is there a place for me with God since I am not wretched, poor and outcast? The parable says “yes” I am with God, always. Perhaps I need to rest in that and be open, loving and caring for other “children” that need to be welcomed or welcomed back.

“… let God, whose unlimited, unconditional love melts away all resentments and anger and makes me free to love beyond the need to please or find approval.” (p83)

I learn that the father loves both sons, and His love is not divided into “more and less” for them. Living in a world of compassion, how do I let others (my partners, children, friends, family) know that they don’t just get a portion allotted to them? They get what I can give and what they are willing to receive – there is no measurable depth or worth of this kind of love. It is pure grace and gift, whether it is from God, parents, spouse, sibling or child or from me.

When I recognize this, I see where Nouwen is leading me – to be the Father. I must become like the Father. As a parent, I see this naturally but could never quite put it to words, especially when accused by my kids of favoring one over the other.

“No father or mother ever became father or mother without having been son or daughter, but every son and daughter has to consciously choose to step beyond their childhood and become father and mother for others. It is a hard and lonely step to take… but it is a step that is essential for the fulfillment of the spiritual journey.” (p121)

To know and feel called to serve others, yet not to have received the mercy of God myself leaves me handicapped, not fully-equipped to do the very service I feel called to.

“I have to dare to carry the responsibility of a spiritually adult person and dare to trust that the real joy and real fulfillment can only come from welcoming love those who have been hurt and wounded on their life’s journey, and loving them with the love that neither asks nor expects anything in return… [Otherwise] who is going to be home when they return – tired, exhausted, excited, disappointed, guilty or ashamed? Who is going to convince them that, after all is said and done, there is a safe place to return to and receive and embrace? If it is not I, who is it going to be?” (p132)

Nouwen says the painting could just as easily been called The Welcome by the Compassionate Father. In the painting, the father’s hands are the true central point. The light and the eyes of others focus on those hands. The left hand is masculine while the right hand is more feminine. So the character “is mother as well as father” (p94) – welcoming, holding and caressing the son. The painting is about the father’s love for both of his sons. Many people live with feelings that they are not worthy of love, or they wonder whether others truly love them. Many suffer from loneliness. The father of the prodigal son though, invites us to experience joy, which can be more difficult than experiencing sadness or frustration. Joy, like gratitude, is a choice.

We are called to be as compassionate as God is. We are called to follow Jesus’ example as a son: “the younger son without being rebellious” and “the elder son without being resentful.” We are also called to grow into spiritual fatherhood – this means both father and mother, masculine and feminine. All of that is easy to say but very difficult to live. To be compassionate means we do not compare ourselves to others and we are not competitive either.

Nouwen finds three major traits in a compassionate father: grief (“the discipline of the heart that sees the sins of the world” (p121), forgiveness, and generosity. The father said to the elder son: “All I have is yours.” Nouwen adds: “There is nothing the father keeps for himself. He pours himself out for his sons” (p122). Spiritual fatherhood is “the radical discipline of being home.” There is something foundational about the father being home, where the father waits and the transformation from son to father takes place in an individual.

For 3 Sunday’s in June, we are going to look at 3 big issues 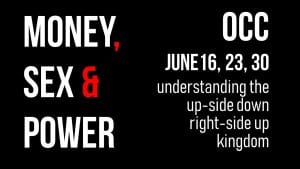 Starting June 10 we are reading through the Psalms…
you can get a printed copy at the OCC Welcome Centre
or you click on the link to download a pdf copy of the reading plan: Reading the Psalms
As usual, our reading plan is for 5 days a week, giving you a couple of days a week to catch up.

The Psalms express a wide range of emotion: thanksgiving; praise; lament; celebration; judgment; and wisdom.
In the Psalms, we find honest, sometimes brutal, expressions of the heart.
They are not a string of sentimental platitudes or religious propaganda.
No, the Psalms express the highest joy and the deepest sorrow; they plead with God, shout at God, and beg God for forgiveness. They lift up virtues and righteousness, and strongly condemn the ugly abuses people sometimes carry out. The Psalms tell of some of the attributes of God; the history of God; humanity’s great potential; and the darkness of human depravity.

As you read and reflect on the Psalms, let the words resonate in you. I find that reading the Psalms aloud helps me to grasp how wide and long and high and deep is the psalmist’s longings for God. And because the Psalms are so expressive, I find the Message an excellent version to use for reading the Psalms.

If you want to listen to the Psalms sung, there is a group out of Australia called the Sons of Korah (you can check them out on YouTube). They are known for putting the Psalms to music, the lyrics for their songs are taken almost verbatim from the Psalms. Several psalms are introduced as being by the Sons of Korah: Psalms 42, 44–49, 84, 85, 87, and 88.