Ways Into Sunday’s Scripture from OCC

Each week during Advent, on Fridays, I will offer some ways into Sunday’s Scripture to help us grow, mature, and be formed or shaped spiritually.

5-7 In the time of Herod king of Judea there was a priest named Zechariah, who belonged to the priestly division of Abijah; his wife Elizabeth was also a descendant of Aaron. Both of them were righteous in the sight of God, observing all the Lord’s commands and decrees blamelessly. But they were childless because Elizabeth was not able to conceive, and they were both very old.

8-10 Once when Zechariah’s division was on duty and he was serving as priest before God, he was chosen by lot, according to the custom of the priesthood, to go into the temple of the Lord and burn incense. And when the time for the burning of incense came, all the assembled worshipers were praying outside.

11-17 Then an angel of the Lord appeared to him, standing at the right side of the altar of incense. When Zechariah saw him, he was startled and was gripped with fear. But the angel said to him: “Do not be afraid, Zechariah; your prayer has been heard. Your wife Elizabeth will bear you a son, and you are to call him John. He will be a joy and delight to you, and many will rejoice because of his birth, for he will be great in the sight of the Lord. He is never to take wine or other fermented drink, and he will be filled with the Holy Spirit even before he is born. He will bring back many of the people of Israel to the Lord their God. And he will go on before the Lord, in the spirit and power of Elijah, to turn the hearts of the parents to their children and the disobedient to the wisdom of the righteous—to make ready a people prepared for the Lord.”

18 Zechariah asked the angel, “How can I be sure of this? I am an old man and my wife is well along in years.”

19-20 The angel said to him, “I am Gabriel. I stand in the presence of God, and I have been sent to speak to you and to tell you this good news. And now you will be silent and not able to speak until the day this happens, because you did not believe my words, which will come true at their appointed time.”

21-22 Meanwhile, the people were waiting for Zechariah and wondering why he stayed so long in the temple. When he came out, he could not speak to them. They realized he had seen a vision in the temple, for he kept making signs to them but remained unable to speak.

23-25 When his time of service was completed, he returned home. After this his wife Elizabeth became pregnant and for five months remained in seclusion. “The Lord has done this for me,” she said. “In these days he has shown his favor and taken away my disgrace among the people.” ~Luke 1:5-25

The situation of Zechariah and Elizabeth as old and childless is presented in historical context. There is the announcement to Zechariah in the Temple of a child who will be called John. We are told about his manner of life and of his mission to prepare people for the Lord. John is to be a voice, but Zechariah because of his lack of faith was struck dumb. In due course, his wife Elizabeth conceived. She spent months in retreat and thanked God for taking away her disgrace in being childless.

Zechariah and Elizabeth are an old couple, as were Abraham and Sarah (Genesis 18), when they were promised a child.

The ‘barren woman’ appears regularly in the Bible story; the mothers of Isaac, Jacob, Samson and Samuel, and Mary gave birth as a virgin. The point is that everything that happens is the plan of God.

Zechariah and Elizabeth were not expecting these amazing things to happen to them; they were simply ordinary pious Jews living according to the Law.

“Zechariah, your prayer has been heard.” For how many years had Zechariah been making that prayer? For so many, that he had ceased to believe it would ever be answered. His doubt is so great that he askes for a sign. Is it a coincidence that the sign he is given is to be struck dumb? Unable to speak, all he can do now is listen. As God has listened to him over the years. As God listens to me. “…he will go before him, to turn the hearts of parents to their children, and the disobedient to the wisdom of the righteous, to make ready a people prepared for the Lord”.

Elizabeth was barren and God intervened to show his care and his power.

Zechariah doubted the angel’s message and was punished for it.

Zechariah and Elizabeth belonged among the Lord’s own ‘little ones’ of the earth, among the ‘God fearing’ masses. Each of them, judged by the depth of their belief, could be rated as being ‘one in a thousand’ – while, to the external view, each was unknown and just like a thousand others. And God seemed to be even withholding the reward that might have been expected in those days – they were childless.

The reward did finally arrive – but not without some further testing of faith, given the couple’s stage in life. And Zechariah learned also that the child foretold had already been made over to the designs of the Lord – the child was being sent to prepare the way, in a role akin similar to that always expected of the prophet Elijah – for God’s final intervention in the last days of this age. Even the name (‘God has shown favour’) being invoked for the child, spoke of God’s intention.

Despite all his prayer, and reassurance from the angel, Zechariah is unable to put his trust and faith in God’s way. The consequence was months of isolation, unable to communicate. Despite his obstinacy, God’s favour is seen in the birth of his son.

Elizabeth has no difficulty in acknowledging the source of new life. “This is what the Lord has done for me.”

This was a red-letter day for Zechariah: he had been chosen by lot from the hundreds of available priests, to offer incense for the Jewish nation. His childlessness, the great grief of his life, would have been on his mind as he prayed. The revelation that he would be the father of a special child was such an answer to prayer as to strike him speechless.

There are several stories of Old Testament women who become pregnant against all the odds: Elizabeth, mother of John the Baptist; the unnamed mother of Samson; and Hannah, mother of Samuel. They remind us that God is in control of the human story, and intervenes graciously in favour of the helpless and despised.

Gabriel was sent to bring good news to Zechariah, who did not believe his words.

‘Both were getting on in years.’

Zechariah became dumb because he did not believe the good news.

Zechariah served as a priest in the Jerusalem Temple. One of the duties of the priests was to keep the brazier burning that stood on the altar of incense in front of the Holy of Holies. They would fill the brazier with fresh incense before the morning sacrifice, and again at the evening sacrifice. It was during such an occasion that God’s messenger, Gabriel, appears and foretells the birth of John the Baptist. Later, when his wife Elizabeth, against all odds, finds herself pregnant, she proclaims, “This is what the Lord has done for me when he looked favourably on me and took away the disgrace I have endured among my people.” Barrenness was considered a humiliation and even God’s punishment 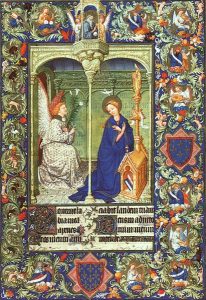 The Archangel Gabriel Appears to Zacharias, Limbourg Brothers, before 1416

There are some advertisers that come up with some creative advertising [I do not necessarily endorse any of these products / companies]. Enjoy.