Ways Into Sunday’s Scripture from OCC

Each week during Advent, on Fridays, I will offer some ways into Sunday’s Scripture to help us grow, mature, and be formed or shaped spiritually.

My soul glorifies the Lord
and my spirit rejoices in God my Savior,
for he has been mindful of the humble state of his servant.
From now on all generations will call me blessed,
for the Mighty One has done great things for me—holy is his name.
His mercy extends to those who fear him,
from generation to generation.
He has performed mighty deeds with his arm;
he has scattered those who are proud in their inmost thoughts.
He has brought down rulers from their thrones
but has lifted up the humble.
He has filled the hungry with good things
but has sent the rich away empty.
He has helped his servant Israel,
remembering to be merciful
to Abraham and his descendants forever,
just as he promised our ancestors. NIV

I’m bursting with God-news;
I’m dancing the song of my Savior God.
God took one good look at me, and look what happened—
I’m the most fortunate woman on earth!
What God has done for me will never be forgotten,
the God whose very name is holy, set apart from all others.
His mercy flows in wave after wave
on those who are in awe before him.
He bared his arm and showed his strength,
scattered the bluffing braggarts.
He knocked tyrants off their high horses,
pulled victims out of the mud.
The starving poor sat down to a banquet;
the callous rich were left out in the cold.
He embraced his chosen child, Israel;
he remembered and piled on the mercies, piled them high.
It’s exactly what he promised,
beginning with Abraham and right up to now. MSG

Some evangelicals don’t like this passage – for a couple of reasons. One it is by Mary. Two the message of the text.

First of all, there has been a type of evangelical, rooted in some of the fundamentalism of the 1950’s and 60’s that rejected anything and everything to do with Roman Catholicism, including Mary. That was a time of evangelicals separating themselves from anyone who didn’t dot their “i’s” and cross their “t’s” exactly the same way they did. And so Roman Catholics, and by extension, Mary, were on the outs. While we don’t venerate or pray to Mary, there is much we can learn from here.

The second reason why some ignore this passage is the message of Mary’s song. Mary’s song is a bold declaration of justice, freedom, and hope in her and in our world. These are the words of a woman who is strong because of God’s Spirit. She declares God’s truth for all, especially for the downtrodden. God is, and still is, doing a new thing.

Mary’s Magnificat is not just a hymn of praise to God. It is that. But it is so much more, a manifesto of revolutionary nonviolence and a call, not to arms, but to disarmament and justice. Mary proclaims what God is doing in the world — bringing justice to the poor, fulfilling his promise of peace. She testifies that God is a God of mercy, a God of nonviolence, a God of peace.

Words like this cause trouble in our own times, too. Mary’s Magnificat was banned in Argentina in the mid-1970s because the Mothers of the Disappeared published it as a call for nonviolent resistance to the military junta. The words are so powerful, they are considered by some to be dangerous.

Nunc Dimittis is the Prayer of Simeon in Luke 2:29-32.
The name comes from the opening words of Simeon’s prayer in Latin “Now let me depart” 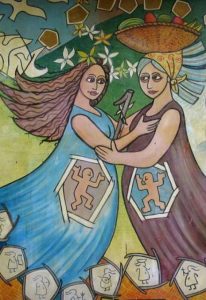 This poem by Malcolm Guite celebrates the moment in Luke’s Gospel (1:41-56) when Mary goes to visit her cousin Elizabeth, who was also, against all expectations, bearing a child, the child who would be John the Baptist. Luke tells us that the Holy Spirit came upon them and that the babe in Elizabeth’s womb ‘leaped for joy’ when he heard Mary’s voice. It is as the older woman blesses the younger, that Mary gives voice to the Magnificat, the most beautiful and revolutionary hymn in the world. There is much for the modern world to ponder in this tale of God’s blessing and prophecy on and from the margins.

You can click on the title to hear Malcolm Guite read his poem.

Here is a meeting made of hidden joys

Of lightenings cloistered in a narrow place

From quiet hearts the sudden flame of praise

And in the womb the quickening kick of grace.

Two women on the very edge of things

Unnoticed and unknown to men of power

But in their flesh the hidden Spirit sings

And in their lives the buds of blessing flower.

And Mary stands with all we call ‘too young’,

Elizabeth with all called ‘past their prime’

They sing today for all the great unsung

Women who turned eternity to time

Favoured of heaven, outcast on the earth

Prophets who bring the best in us to birth.